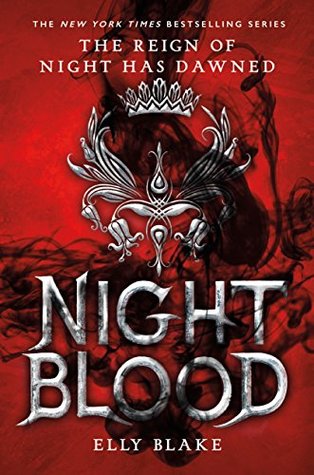 “You are not your fire. You are not your darkness or your light. You have an unconquerable spirit, determination, compassion. You bring people together. You are mine and I am yours, and it has nothing to do with fire or ice. Even death couldn’t change that.”

I went in this book totally expecting it to be a five star book and to be reading the book that made the whole series stand out. The first book was “eh” and the second book showed a lot of improvement, but still wasn’t totally engulfing. While I still really enjoyed this book and the series as a whole, it was a bit too predictable and the characters were a bit too flat for me to find myself in love with the story. The ending played out much better than I thought it would, but I still think things could have been done better.

Ruby, Arcus, Kai, and a host of Fireblood masters travel back to Tempesia, and it’s interesting to see the Frostbloods and Firebloods coexisting with each other. It was fun having people like Kai meet the monks at the abbey, and it was nail-biting to see how the residents of Tempesia would react to having Firebloods in their midst. I definitely think each book gets better as the series goes on when it comes to the narrative style, and you can see the author’s writing improving. There is much more vivid writing and descriptions of things in this book, and I found it much easier to picture everything as it was happening.

Pros:
-Cryptic visions from the gods full of clues: tattoos, tattered clothing, mysterious prison cells.
-Negotiations with pirates. Navigation ships to islands not charted on any map.
-Resolution to most of the plotlines and a semi-happy ending.

Cons:
-The romance fizzled out for me in this one.
-Arcus treats Ruby like crap, and it got to the point that I think you could classify his actions as emotional abuse.
-More predictability, which brings me right back to my issues with the first book in the series.
-Kai and Arcus are ridiculous around each other, and it actually gets worse in this book.

*Spoilers*
At one point Ruby has to kiss Kai to convince an enemy pirate of something, and Arcus sees this through a window. Instead of asking Ruby about what happened, they have the following conversation:
“His lips twisted. “What the blazes was that display in the tavern?”
“Necessity?”
“You knew I was watching through the window. You saw me.”
“Yes, I did.”
“Did that enhance the experience for you?” I didn’t appreciate the sneer in his tone.
“No, it did not.”
“Why don’t I believe you?”
*End spoilers*

Arcus basically accuses Ruby of getting off on making him jealous, and holds her accountable for something that needed to be done out of necessity to save them all. He constantly jumps to conclusions and thinks the worst of Ruby, and that’s not the way you act towards someone you love.

I was pretty disappointed that Ruby and Arcus are making a go of things with each other, but never seem to be on the same page. Whether it’s Ruby trying to play a romantic trick and having it go horribly wrong, or Ruby making grand announcements and decisions without consulting Arcus, it just didn’t seem like they were working together at all. I mean, how much time can be spent on Arcus being overprotective and Ruby doing things without talking to Arucs about them. And then they have all these conversations where they’re “mad” at each other, while they’re “punishing” each other with kisses. Finally having Arcus and Ruby together was a short lived triumph, and if you’re hoping for things to get all cute and happy between them then you’ll be disappointed. I think the author was trying to use their arguments and tension to show that the Minax is still wreaking havoc on Ruby, but it was totally frustrating and made those parts hard to read.

I couldn’t stop laughing. “Now who’s being ridiculous?”
“If you don’t stop, I’m going to kiss it out of you.”
I leaned forward, eyes challenging, still grinning. “Do it. Make me pay.”
“You think I won’t?” He reached out and pulled me closer, hemming me between his powerful arms and his hard chest, just where I liked to be. “I have a punishment in mind.”

Arcus acts like an inconsiderate dumbass half the book. Ruby is clearly going through things, but instead of understanding and trying to help her, he closes off and pushes her away. Arcus is a Debbie downer, worry-wart, dark little angry thing for the majority of the book, and I wasn’t feeling it! Ruby repeatedly tells Arcus how much she cares about him and that she chose him, but he constantly acts like he doesn’t believe her and that he has cause to be controlling of Ruby all the time. “I pushed you away when the Minax was tearing you apart and you needed me to hold you together.” His voice dropped to a harsh whisper. “I hurt you when you were already hurting. I can’t forgive myself for that.” BUUUTTT he does the same thing five minutes later so he basically doesn’t mean anything he said. As much as I hate to say this, the thing that finally broke up the staleness of the back and forth between Arcus and Ruby was when the Minax would take over Ruby and try to goad Arcus. Those were the only times when they weren’t playing hot and cold, and when Arcus actually stuck to his guns with how he knew what Ruby really felt for him. It shouldn’t have been like that!!

And then we have Kai, who keeps trying to lay claim on Ruby and persuade her to be with him, when she’s already explicitly told him how she feels about him; this is all unnecessary drama in my opinion, and I think it dragged the book down as a whole. I would have much preferred a story where Ruby, Arcus and Kai find a safe middle ground and actually work together instead of finding loads of drama to drag everything down.

“We’re facing an enemy who would destroy us all in a blink, and here you are, trying to pulverize each other. We’re supposed to be working together! That’s the whole point of all this! If you two can’t do it, what hope is there for the Frostblood and Fireblood armies?” I threw up my hands. “I give up! Kill each other, for all I care! I’m leaving.”

The end of the book was satisfying in ways and unsatisfying in others. I won’t spoil anything, but my main concern was that there would be some dues ex machina that would suddenly fix everything. While the end of the book didn’t come out exactly as I predicted, the only major revelations throughout the story were suuuuuper predictable. Some of my notes while reading literally just said “duh” or “SOOO predictable”. I saw these things coming from a mile away!! The rules of the Gods also got on my nerves a little bit in this book. The Gods are always saying things like “we can’t interfere directly with the mortal world”, but for some reason the exception to the rule is when they possess a human body? And the only God that will possess a human body is Eurus, so the human world is only being affected in negative ways by the Gods? My main issue with how fully the plotline revolved around the Gods was that because there are Gods involved, the plot can be flipped on its head on a whim when godly powers are involved, and that makes some of the victories and defeats feel unearned or cheapened.

While this review has, in effect, turned into somewhat of a rant- I would like to point out that I did enjoy reading it and I liked the series as a whole. The first two books slowly built up my expectations, and I have to say I’m disappointed as far as conclusions go, but I did enjoy reading the series. I’ve read the first two books twice now, and I enjoyed them each time through. If you’re just starting out in the YA fantasy reading world and want something that is pretty entry-level that is easy to follow along with and will ease you into the genre, then this one is for you. If you don’t mind a romantic coupling where they argue and are very hot and cold, then this one is for you. Overall, a mid-range series that can hold its own, but not something that will stand out in my memory as one of my favorites over the years.