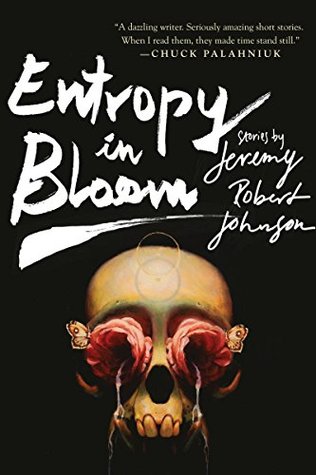 Rating by story at bottom of review! Also some sort-of spoilery content recaps and standout quotes if you want to check them out, but I would recommend going into this blind!!

“It’s her fault, really. She’s the one who wanted to have her lips removed.”

When a story starts out with people missing their lips, you know it’s going to be a strange one. The pacing is great and you jump right from one story into another. Going into each story blind and with no idea about what crazy thing is going to happen totally adds to the experience. For some really dark content, these stories are pretty funny at times, and it’s definitely a brand of dry humor. This collection is a random grab bag full of the fucked up, bizarre, drug addled, sci-fi and not so sci-fi, morbid, and mundane- and it totally works. There are 16 different short stories, and out of all 16 there were only 2 or 3 that I could have done without. The majority was fresh and fast-paced and wholly held my interest.

There are overlapping themes of wanting to be special and “different”, of trying to escape from reality when it becomes too depressing, a lot of apocalyptic and futuristic themes, of rebelling because of bad household/family situations, and themes of going against “the establishment”. The topics were dealt with in more unsettling ways than in ways that made them into horror, but each take was different and definitely made you think.

I also really appreciated the author’s insight at the end; there was a little blurb that explained what he was thinking when he wrote each story, and it helped me to understand and fill in the blanks. The stories were so random and bizarre that it was interesting to see where each idea came from and compare the author’s meaning to how I interpreted each one reading them for the first time.

The League of Zeroes – 5 stars. Extreme body modification, futuristic. Felt like it was too short and I really would love a longer story based in this world. “We’re not Post-Apocalyptic, we’re Post-Yesterday. One look around, though, and I realize that we must have had some brutal kind of Yesterday.”

Persistence Hunting – 5 stars. B&Es, strip clubs, cocaine. Leaves you wanting more. “God, she was easy on the eyes. Too bad she was murder on the rest of you.”

The Oarsman – 2 stars. Monks and spontaneous combustion. A little too “out there”; I had trouble making much sense of it or what the point was. “Should I have made sure he was actually dead before I tethered his body to the outside of the station? Some would say so. But rest assured, that son of a bitch was still smiling at nothing when I pushed him into space.”</em?

The Gravity of Benham Falls – 4 stars. A strange bracelet, lots of murdered women, a little retribution. “How many small town drug dealers could she seduce and steal from, before one of them caught on and decided to hurt her, or worse?”

Dissociative Skills – 5 stars. Ketamine, scalpels, and some very bad decisions. This was a whole lot of EWWW and I had my hand over mouth is disgust half the story. “Curt Lawson felt like a surgeon right up to the moment he snorted the horse tranquilizer.”

Snowfall – 5 stars. A helpless child, darkness, snow in the summer. This one was so sad! “He thought for a second that maybe God was giving him this miracle to apologize for making him deaf, but he felt instantly guilty for thinking so.”

When Susurrus Stirs – 2 stars. Parasites, rebirth, puss and splitting human skin. Gross and more gross; also, any story that uses “meat-sprout” as a name for a penis automatically loses points in my book. “At some point we insert our thumbs into our mouth and suck the meat clean from the bones. Anything to feed the new cycle.”

Luminary – 4 stars. Fireflies, dying cats, and hospital visits. This one was ‘eh”.. interesting concept, but was sorta plain compared to the others.  “My brother burned to death in the summer of 1967. The doctors never found any evidence of the fire on his flesh, any scar on his skin. I know the truth. I watched him burn.”

Trigger Variation – 4 stars. Pillow fights, roid rage, anarchy. A little depressing and a little messed up, with a bit of a twist at the end. “And so Jackson’s fists fell again, sure and steady, the echoes of his final mercy sounding long into the night, saving them both from the burden of being human.”

Cathedral Mother – 4 stars. Activists and murder, parasites, government projects. I feel like this one was a little too short and the end was left a too open ended for my taste, but I still enjoyed it! “The sounds were as follows: a sharp crack as the branches separated, a shocked yell accompanied by a terrible whooshing sound as gravity got serious, and at last a chimerical whoomp-crunch as Cristoff created the first and only Cristoff Crater at Humboldt Redwoods State Park.”

Swimming in the House of the Sea – 5 stars. A protagonist you hate, people with mental handicaps, and.. redemption, maybe? Pretty sad story, it was a rollercoaster of emotions! “It’s like the little fucker wants me to cry. So I do, I break, and I cry for longer than I ever have before, and Dude just keeps running his fingers through my hair until I stop shaking.”

Saturn’s Game – 5 stars. Psychotic breaks, angry fathers, and green apples. It’s hard to explain what actually happened in this one, but it had a lot of meaning for being so short. 5 stars. “What if I grabbed Todd’s head and then bit off his nose?”

The Sharp-Dressed Man at the End of the Line – 4 stars. Twinkies, radiation, and a “straw-botomy”. Okay, as depressing as this story was, it sure was funny. “His carefully crafted suit had gone cannibalistic.”

States of Glass – 5 stars. Tattoos, morgues, and semi-trucks. This story took an interesting look at grief and the writing was really well done. “I doubt this pamphlet can tell me why I’m ready to tear the shirt off the man who showed me my husband’s corpse today.”

The Sleep of Judges – 5 stars. Drug smuggling, burglaries, and men that bark like dogs. I could feel myself going on this descent into madness with the MC. This was the longest of all the stories by far, and also the creepiest. “The fact that Roger had dealt with spontaneously-generating bird corpses and barking humans with black oil eyes in the last week didn’t negate the fact that he still had to call the goddamn insurance company.”