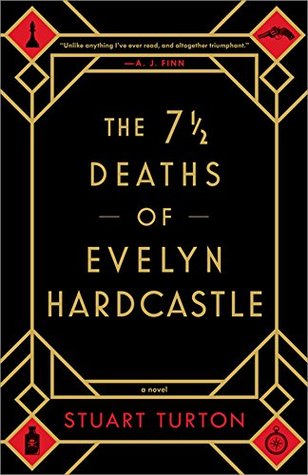 “If this isn’t hell, the devil is surely taking notes.”

I’ve never read anything quite like The Seven Deaths of Evelyn Hardcastle, and I enjoyed every second of it. There’s a new mystery around every corner, and every time you feel like you’ve gained a step you’re thrown a foot back. Every new character is a question to unravel, and new clues were slowly laid out piece by piece. I was totally hooked around the ¼ mark, and it just got better from there! At times you definitely feel just as disoriented as the narrator. I made myself a bit of a timeline as I read, but the different days and different bodies all interact with the timeline in different ways, and it ended up being easier to just sit back and see what happened. I took really detailed notes, and I still had no idea what the final outcome would be and what surprises we’d encounter along the way.

Pros:
– “murder in the morning and costumes at night, cryptic notes and burnt butlers”
– unique plot with lots of twists and turns (seriously, it never ended)
– a jigsaw puzzle of clues and secrets, mysteries layered on top of each other
– all kinds of characters to analyze, and nothing is ever truly what it seems to be

I appreciated the added touch of having each body affect how the narrator acted in different, subtle ways. Plus, we’re given the mystery of each body’s true motivations/purpose, how each one interacts with the house and other characters, and the question of who they really were when not occupied by the narrator. I feel like this review is making the book sound confusing as hell, and it really wasn’t; the intricacies are what gave this book such an awesome edge and kept the reader on their toes. I don’t want to give anything away, but the story also dabbles in the Grandfather paradox, and sort of plays around with “time travel” a bit, which I found super interesting.

“Whatever happened yesterday, it will happen tomorrow and the day after. I promise you, however you may consider interfering, you’ve already tried and it’s already failed.”

You know the part in a murder mystery when the clues have all come together, and all the events come to light, the murderer revealed? That happened at least five times in this novel. The clues and secrets kept coming, and I have whiplash from all the twist and turns. Just when you think the truth is being laid out, another revelation is made, and flips everything on its head. I think this book takes the cake when it comes to murder mystery bait and switch. I was a little disappointed at the final reveal, and then it ended up not being the final reveal. Initially the whole story seems to be about solving the murder of Evelyn Hardcastle, but it quickly becomes clear that there’s much, much more going on than that. This book is super unique, and I loved it for that; I’ll definitely be on the hunt for more books like it in the future.

4 thoughts on “REVIEW: THE 7 1/2 DEATHS OF EVELYN HARDCASTLE BY STUART TURTON”