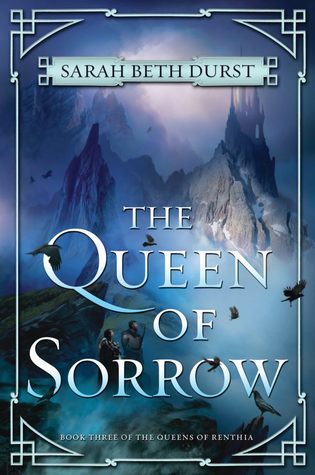 This author is definitely talented at keeping up a constant tension and making the reader wonder what will happen next. After the events that occurred earlier in the series, I honestly didn’t feel like any character was safe, and was ready for anything to happen. The first half of the book was a bit slow, but things steadily picked up in the second half, and I was racing through the pages towards the end.

Naelin’s irresponsibility when it came to what she would do to protect her children didn’t sync with what I thought I already knew about her. I understand that she loves them more than life itself and that she wants to protect them and keep them safe, but she does things that could endanger everyone she’s sworn to protect, and flies into an uncontrollable rage with no regard for what she’s doing to the land. Naelin is the older of the two queens, and is supposed to be the more responsible one, but Naelin’s acts when it comes to her children leaves Daleina to pick up the pieces, and it took longer than I thought it would take to get to a point where Naelin admitted she needed to control herself.

Headmistress Hanna makes a point that did help me understand Naelin a bit more: “With half a life already in hand, Naelin couldn’t just shake the foundations she had built that informed who she was. And yet that very foundation had been shaken—her belief in her ability to keep her children safe—and now her emotions leaked through every time she wasn’t consciously blocking them”. If Naelin ruins the land, there will be no land for her children to live in, and it seemed like the Naelin we’d gotten to know would have been mature enough to realise this from the start. It felt a bit like she was breaking character when she started destroying things, and it took me a little while to reconcile that with the picture of Naelin I’d already developed.

“Even people who are smart and kind and careful sometimes have to stab things.”

I was glad that a lot more of the story was told from Merecot’s point of view. She’s a villian that you love to hate, and just when it seems like she’s going soft, she’ll do or say something to remind you of who she really is. It was hard to know whether to trust her word or not, and when characters interacted with her I was constantly in fear for her safety. Merecot definitely has a unique view when it comes to what she’s willing to do to accomplish her goals. I think this line sums up Merecot’s personality nicely: “She wished she could have made Daleina see that the poisoning hadn’t been personal. She hadn’t wanted Daleina to die. Or, at least, she would have cried for her once the deed was done.” Merecot doesn’t care much about the destruction that’s left in her wake, as long as she ends up at the destination she was aiming for.

“You’re a bad person,” Llor informed her. Sliding closer to him, Erian elbowed him in the stomach. Don’t make her mad, she wanted to say. But Queen Merecot merely smiled—a real smile this time. “Yes, I am,” she agreed, without any trace of anger in her voice. “But I am a very good queen.”

As far as a conclusion to the series, I would have liked for the action to be spread out more, and for less of it to be held until the end of the book. The beginning of the story was mediocre, while the end had me biting my fingernails and on the edge of my seat. Throughout this series I’ve grown to love this world and the characters in it, and definitely think this series deserves much more attention and recognition than it’s currently getting. I have so much appreciation for how this series ended; the author really did the unexpected and pointed you in so many directions that you never knew which plans would work and which wouldn’t. The story never took the obvious route, and I ended up being pleased with the way things finally played out. Some things were wrapped up a bit quickly, but overall I was happy where things left off, and it was bittersweet to finally have the series come to an end.