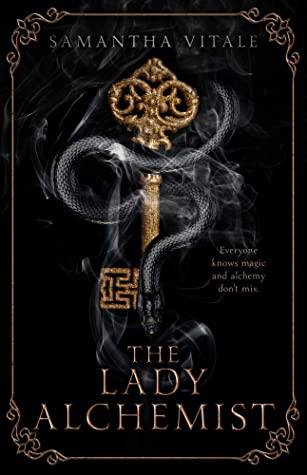 What an unexpected and unique take on the story of  Rumpelstiltskin! A lot of the aspects of this book followed the clichés of the genre, but sometimes you just need to read a book like that, and it can even be comforting! And there were definitely new concepts, as well as fresh twists on some of the more recognizable concepts. The characters were memorable and I found myself attached to them very quickly; they acted in ways that I didn’t always expect, but also made the smart decisions I wanted them to, instead of being the types of characters to make bad decisions just as a device for the author to create conflict in the plot. I also appreciated that alchemy was a separate entity from magic in this world and that we got to see how magic and alchemy each worked. There was plenty of interesting lore and world building, but I really wish it was expanded upon on a deeper level, and I’d love to read more stories that take place in this world in the future so these ideas can be explained in more detail.

“That night, Sepha dreamed she was a mother. She was staring down at her infant with something like worship, something like terror. Someone she couldn’t see laid a hand on her shoulder and whispered, “You did it, Seph.” At this, the infant glared. It opened its mouth and said, in a horrible, guttural voice, ‘You … will … die.’”

Sepha was constantly trying to convince herself that everything was fine, when it most certainly was not, and I could relate to that on so many levels. Her inner monologue of “it’s fine” and powering through in a “fake it til you make it” mentality was super relatable and almost humorous at times. Sepha was harboring a really big secret, and because of that she was lying to her friends and hiding things. It’s a pet peeve of mine when the drama of the story relies on concepts like this as a plot point, but things played out better than I thought they would have, and I actually didn’t mind the way everything came to light and everyone’s reaction to Sepha’s revelation. I think Sepha was just a bit too plain and cookie cutter to be a great protagonist, and some of her reasoning got on my nerves, although I won’t get into details in order to stay away from any spoilers.

As I was reading, I only found myself fully immersed in the story a couple times, and I wanted to be more drawn in than I was. There were some things that I feel had too much time spent on them, and other things that seemed interesting and that I wanted more detail on. The ending was a little rushed, and there were definitely some loose ends that I would have liked to have gotten answers or more information on. Overall, this novel was definitely worth the time and I really enjoyed the characters and the fresh take on alchemy and magic. While there are things that could have been done differently to make the story more interesting, the pace never slowed and all of the ideas were solid.

One thought on “REVIEW: THE LADY ALCHEMIST BY SAMANTHA VITALE”